Apple’s 4th generation iPad Air has a lot to offer. The A14 Bionic SoC at the heart of the device delivers excellent performance in a wide variety of apps and games, and the 10.9 “Liquid Retina display looks great in many different conditions. In fact, for some. Use case, the iPad Air could compete with a full-fledged computer, if only it had the necessary input devices to maximize productivity. However, many companies are trying to fill this gap in the iPad Air, including including the mainstay of the industry, Logitech. Recently, Logitech introduced the Combo Touch, a series of iPad cases with its own removable keyboard and touchpad. Would that be enough to make the iPad Air go from multimedia consumption to productivity machine?

Getting to know Logitech Combo Touch

The Logitech Combo Touch for iPad Air 4 starts off as a case with a kickstand, reminiscent of Microsoft’s Surface Pro line. The back of the case and even the entire keyboard (which we’ll cover in a minute) are covered in a smooth woven fabric. It feels great in the hand, but we are concerned that it might stain over time. This is a possibility on any case material, of course, but even more so with fabric. Fortunately, Logitech designed the Combo Touch to be wiped clean with a damp cloth, so keeping it tidy and in good condition shouldn’t be a problem. 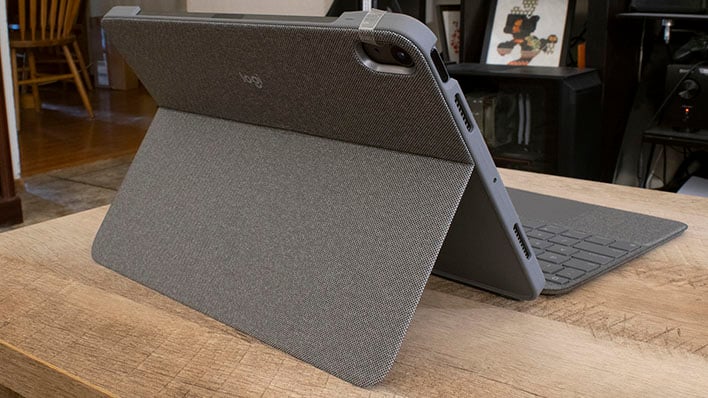 The kickstand on the back of the Combo Touch allows you to use an iPad as a laptop, but Logitech created the Combo Touch to handle four modes in total. Standing with the keyboard attached is Type mode, while standing without the connected keyboard is nicknamed View Mode. By fully folding the kickstand and detaching the keyboard, the Combo Touch switches to sketch mode, suitable for drawing with an Apple pencil. Obviously, the last option is fully closed, or what Logitech calls Reading Mode. At this point, the iPad is just a tablet again, but we have to mention that with the Combo Touch installed, it’s still comfortable in the hand and easy to hold.

The sides of the Combo Touch case are made of a rubberized plastic. The case snaps directly onto the iPad Air 4 and fits perfectly without any leeway or risk of dropping the tablet. It’s actually a little tricky to take the iPad out of the case once it’s been inserted, but that’s probably a good thing – if it was too easy to take out, the fitment would probably be a bit too much. cowardly. All around the edges are cutouts for the speakers and the USB-C connector, and there’s a perfectly-sized spot to mount and charge an Apple Pencil Gen 2 on top while also using it in Type mode.

The Combo Touch is relatively thin and light, but feels solid in the hand. Its edges add only 0.18 “to the width and length of the iPad Air, although the kickstand and soft back make it much thicker at 0.67” with the keyboard attached and in the closed position. The weight is just 20 ounces, although most of it is in the keyboard. According to our scale, only the keyboard weighs 12 ounces on its own. 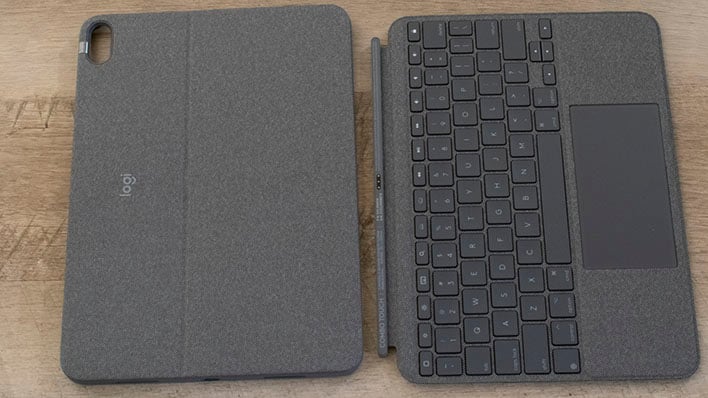 It is only a member of The Logitech Combo Touch family. There are also models for the 12.9-inch iPad Pro Gen 5 and the 1-11-inch iPad Pro Gens. Unlike these models, the iPad Air version is available in one color: Oxford Gray. It would have been our preference anyway, but the Sand option for iPads Pro is a nice, lighter color that may appeal to some of you. Logitech covers all Combo Touch models with a one-year limited warranty.

The selling price is quite high, at $ 199 for the iPad Air model we are looking here or the iPad Pro 11 “, or $ 229 for the iPad Pro 12.9 “Gen 5. There are certainly cheaper options out there, including the Zagg Pro Keys wireless keyboard case we previously had this iPad in. The Zagg’s keyboard has smaller round keys and connects to the iPad via Bluetooth instead of the smart connector, so there are a few downsides to going the cheaper route, however there are still a lot of features to cover, so let’s take a little time to figure out if it’s worth the extra cost.

The excellent keyboard of the Combo Touch

First off, as the subtitle suggests, the Combo Touch’s keyboard is quite nice, considering its size. The keys only have 1mm of travel, but when you think of Apple’s Butterfly keyboards that feel like typing on solid rock with next to nothing, this is certainly a viable solution. More importantly, the keys are 18 millimeters wide, a nice relief after using the Zagg’s rounded and widely spaced keys. It’s as much of a proper laptop experience as the Surface Pro, and it looks pretty good in our book. 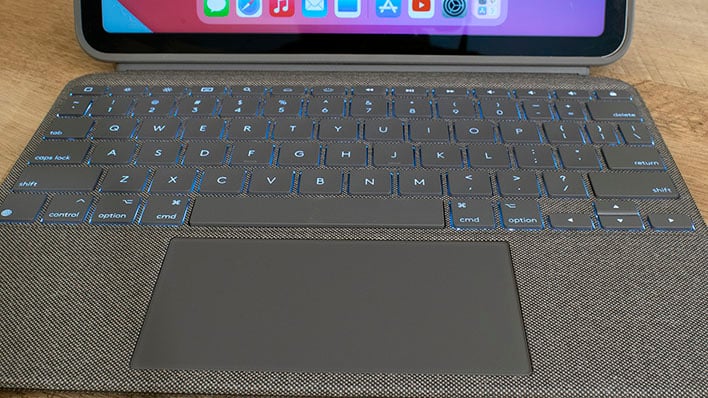 The keyboard connects to the iPad Air via the smart connector on the side. This means that there is no external battery to keep the charge, no Bluetooth connections to manage and no hassle. Magnets built into the keyboard pull it straight into the correct orientation, and after many cycles of removing and reconnecting, the keyboard still registers immediately.

Each key on the Combo Touch is backlit with four different brightness levels, including off. The backlight is sufficient for typing in the dark, even on the lowest setting. The highest setting is still enough to shine in typical indoor lighting, but outdoors it doesn’t seem to do much good. Since there is no battery in the keyboard, be aware that this might add extra drain to the iPad’s battery, but it doesn’t look like it consumes as much juice.

The keyboard has several iPadOS-specific keys in addition to the standard QWERTY layout and number row. At the top left, where Escape would normally be, is a Home button that returns to the Home screen. The top row also features controls for media playback and volume adjustment, as well as keys to adjust both display and backlight brightness. At the bottom left is a global key which, together with various keys, manages system and multitasking functions. These are features from iPadOS 14 that Zagg didn’t use, but Logitech included them in the Combo Touch. 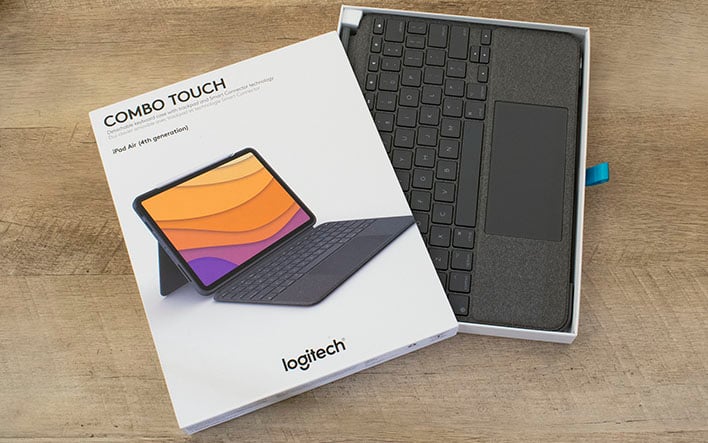 Underneath the keyboard is a relatively generous trackpad. Considering the iPad’s footprint, there isn’t room for much more, and what there is is pretty decent. iPadOS has rudimentary support for mice and trackpads. There are still no context menus when right clicking, but at least we can move the pointer to the address bar in Safari and select it. It seems the hardware is willing and capable, but the software – iPadOS 14, that is – isn’t quite up to the task.

Use iPad as a laptop

At first glance, adding a keyboard docking station to an iPad seems to give it a similar level of functionality to a Chromebook. While iPads are locked to the App Store and iTunes Store, Chromebooks have access to the Google Play Store for apps and media. Both also have fairly proficient web browsers. With iPadOS 15, Swift Playgrounds will be able to create at least a few apps that developers can send to the App Store, while Chrome OS has the full-fledged Android studio.

But is that enough to turn the iPad into a full-fledged computer, like a tablet in macOS? Not exactly. First of all, multitasking on iOS is not as mature as it is on any platform with app windows. It’s just easier to drag windows and organize them the way we want it to than put apps in split screen mode, and not all iPad apps even support this feature in the first place. You might remember that Apple hit on the idea that the company might allow macOS to be installed on the iPad Pro, and that’s unfortunate. iPadOS will have to do.

On the other hand, the app ecosystem on iOS and iPadOS is very good. Adobe, for example, has released a robust set of professional tools for iPadOS. We have a Photoshop subscription through Adobe, so we played around with the iPadOS version. There’s actually a lot to love about it, and we might see ourselves using it for on-the-go photo edits. Unfortunately, the iPad Air 4 doesn’t have ports beyond the USB-C connector, so a separate hub and card reader would be required for this use case.

The Logitech Combo Touch plays an important role in the use of Photoshop. Trying to touch the right side of the screen while using the Heal Brush can be intimidating, but using a trackpad is much easier. Touchscreen interfaces have come a long way, but sometimes nothing beats the precision of a mouse pointer. This device can only get better over time, as Apple really needs to take it up a notch in the multitasking and mouse departments. We hope to see this happen over the next two iterations. Or, you know, just fire up macOS for the iPad Pro.

The Logitech Combo Touch is an exceptionally nice keyboard and case set. The case is slim and fits the iPad Air 4 like a glove. The rubberized, bumper-shaped sides hug and protect the tablet, and the washable fabric is premium quality and should hold up well over time. We think the protection it offers is pretty good for the slimness of it all. People who want more protection will have to look to something else, but for the occasional drop, or to bag it, the case provides good coverage.

The backlit keyboard of the Logitech Combo Touch is the real star. With keys as large as possible in its footprint, the typing experience is excellent compared to other options we’ve tried in the past. The fact that the keyboard connects to the Smart Connector on the iPad is the icing on the cake, as there is no external battery to keep charged and no wireless connection to manage. There are also many keyboard shortcuts and shortcuts built into iPadOS, which makes the keyboard a very important part of turning an iPad into a working computer.

The only thing that holds the Combo Touch down is the price. At $ 199 for the iPad Air 4 and the smaller versions of the iPad Pro, and $ 229 for the 12.9 ”iPad Pro version, that’s certainly not an impulse buy. On the other hand, Apple wants $ 299 and $ 349 respectively for its Magic Keyboard, so Logitech still has a significant price advantage over first-party products. There are cheaper options available, but many of them rely on Bluetooth and have built-in batteries that need to be charged and will fail over time. The lack of battery here should make the Combo Touch usable for the life of the iPad.

The Logitech Combo Touch almost turns an iPad into a real competitor to laptops. Sadly, iPadOS is holding it back, but it’s something iPad owners are probably already used to. In that case, buyers looking for a high-quality, lightweight case and keyboard combination would do well to check out Logitech’s offering, provided the price fits their budget.